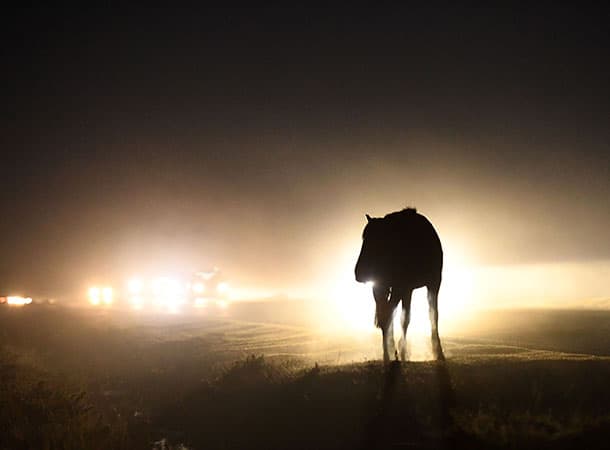 As the nights draw in, drivers using New Forest roads are reminded that animal accidents increase in the lead up to Christmas, with November being the deadliest month for livestock.

Commuters are urged to be vigilant as accidents involving animals in the Forest peak between 5pm and 8pm on weekdays in the winter months.

They are also being encouraged to slow down from 40mph to 30mph, a move which adds only three extra minutes to most journeys across the Forest and can drastically reduce accidents involving animals.

The free-roaming animals are known as the ‘architects of the Forest’ – it’s their grazing which helps make the Forest internationally important for wildlife.

Nigel Matthews, Head of Recreation Management and Learning at the New Forest National Park Authority, convenes the Forest’s Animal Accident Reduction Group. He said: ‘It’s the grazing by animals that helps shape and maintain the New Forest we all know and enjoy. We urge drivers to be animal aware at all times and always add extra time to journeys in the Forest. By slowing down at night, especially when oncoming vehicles approach, drivers, their passengers and the animals will be much safer.’

The worst month for animal deaths is November; as days become shorter and clocks go back, journeys to and from work are often in the dark. Low light in winter, dazzling oncoming headlights and bad weather can make visibility poor.

Most of the drivers involved in animal accidents are relatively local people on regular trips. The high-risk routes have been identified as:

The number of commoners’ animals killed and injured has almost halved in the last 20 years. Sadly though, high numbers of accidents continue to happen.

Charlotte Lines, Chair of the Commoners Defence Association said: ‘Great work has been done by several Forest groups working together to reduce the number of road traffic accidents involving commoners’ livestock. Reflective collars for ponies and ear tags for cattle are just two of the initiatives commoners are implementing to reduce the risk, however there are still too many casualties. Animals can just appear from nowhere and in an instant, so we ask users of Forest roads to drive with care and caution over the winter months and help us protect our animals.

The New Forest’s Animal Accident Reduction Group has spearheaded a range of measures including police mobile speed cameras on the most dangerous routes and reflective warning signs on key roads during the winter months when accidents peak.

Bruce Rothnie, Forestry England’s Deputy Surveyor of the New Forest, said: ‘The New Forest is a unique place. Allowing animals to roam freely across an unfenced landscape is vital to sustaining that uniqueness. Everyone living and working in this special area can help this winter by slowing down and being extra vigilant for animals on or close to the road. Look out and look after.’

Head Agister, Jonathan Gerrelli said: ‘People driving in the Forest need to be aware at all times when travelling on the Forest roads, as the free-roaming animals have no road sense and can appear suddenly in front of your vehicle with little warning. At this time of year, when the clocks change and you find yourself now driving home in the dark, particular care is needed. Allow yourself a little more time for your journey and if visibility is poor, due to the weather, darkness or an oncoming vehicles lights, slow down.

‘If the worst happens, and you do collide with a forest animal, or witness an accident involving one, please report it as soon as possible. A ‘hit and run’ is the last thing we want, where an animal could be left in pain for hours or days if not reported. Even if it runs off, the animal could be seriously injured, so call the police and an agister will be sent out to search for the casualty.’

How drivers can help:
• Be ready to stop – animals can step out even when they’ve seen you approaching.
• Drive slowly, especially at night – there is a pool of darkness behind the headlights of approaching cars – an animal may be standing in it.
• Give animals grazing by the side of the road a wide berth – cross to the other side of the road and be prepared to STOP if there is on-coming traffic.
• Grazing animals on both sides of the road? Take extra care – they may cross to join their friends.
• One animal by the roadside means there are others close by – be aware.
• Bends and tops of hills need more care – animals may be standing in the road just out of sight.
• Reflective collars worn by some ponies may help you see them in the dark – but be aware that not all ponies have them.
• Deer can easily jump the fences alongside roads like the A337, A31 and A35 – and when there is one deer more will usually follow.
• Be animal aware at all times.

To view animal accident maps and statistics in detail, or download an animal accident business card with the emergency numbers to call, visit www.newforestnpa.gov.uk/animalaccidents