You are here: Home / News / Dedicated resource to reduce animal accidents on roads in the New Forest 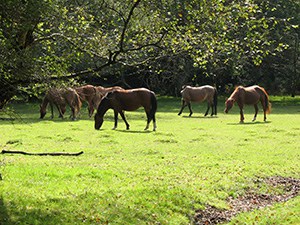 From October one of Hampshire Constabulary’s speed enforcement officers who’s dedicated to the New Forest, will be using new technology to concentrate on reducing animal related accidents as the nights become darker.

Concerned at the number of commoners’ livestock killed or injured on the unfenced roads across the forest, the New Forest Commoners’ Defence Association has developed a project in partnership with the New Forest Verderers and Agisters and Hampshire Police to highlight the dangers on key routes through the forest, especially at dusk and dawn.

The speed enforcement officer will primarily work on routes which have been identified due to human casualties or animal deaths in the past.

In 2013 seventy-two animals were killed in road traffic collisions in the New Forest, a further thirty-two were injured. It’s hoped that the number of driver casualties and animals that are killed or injured will be reduced this year with the introduction of this new initiative.

Alongside speed enforcement Hampshire Constabulary will:

Hampshire Constabulary Road Safety Sergeant Rob Heard said: “I’m delighted that by working in partnership with the Commoners’ Defence Association, alongside the Verderers and Agisters, we are able to provide a dedicated resource to tackle this serious issue in the New Forest.

Jonathan Gerrelli, Head Agister and a Commoner said: “autumn is an especially important time of year as it gets dark earlier in the evening and some drivers may not realise that the number of accidents involving animals on rural roads will increase because of that.”

What can you do?

Drivers can avoid collisions involving animals on roads in the New Forest by:

If you see an animal which looks ill, is injured, or in distress you should report it as soon as possible, giving: a clear description of the animal, what you think may be wrong with it, where you saw it and at what time. During working hours you should telephone the Verderers’ Office on 02380 282052.

If you are unable to obtain a reply, please try the Forestry Commission on 02380 283141. The Forestry Commission line is answered 24 hours a day. If you don’t get an answer from either of these numbers and the situation is urgent, please call the Police on either 999 or 08450 454545 and ask the call taker to contact an Agister.