You are here: Home / News / Drive safely in the New Forest this winter 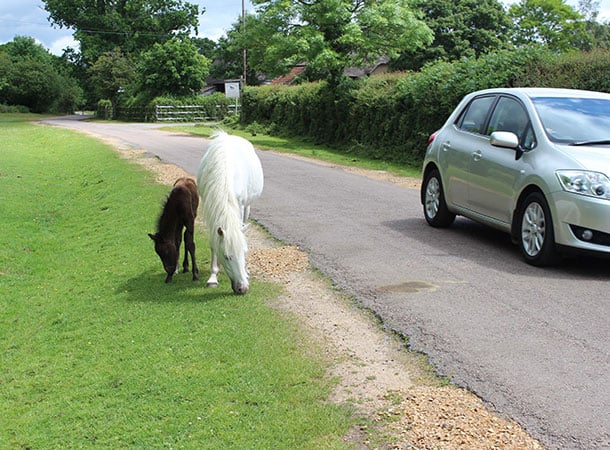 People who regularly drive across the New Forest are being urged to drive extra carefully this winter.

The New Forest National Park Authority, the Verderers and the Commoners Defence Association want to remind people to be extra vigilant on their way to and from work; particularly after the clocks go back this Saturday (29 October).

Nigel Matthews, Head of Recreation Management and Learning at the New Forest National Park Authority, said: ‘Every animal killed is a tragedy for the animal itself and a great loss to the Forest and its owner. It can often take a while for people to adjust to the darker evenings and there is usually a significant rise in accidents in November.

‘A lot of ponies wear reflective collars but many don’t, so drivers should look out for dark-coloured ponies which are often more difficult to see. It is important to drive at a sensible speed, so that you can stop if an animal steps onto the road at the last minute. Ponies have no road sense so it is up to the driver to be extra cautious.

‘It’s not just the animals that are at risk in an accident. If the driver is speeding the results could be catastrophic for their passengers and vehicle too.’

Recent figures provided by the Verderers at their latest meeting demonstrate that despite increases in both traffic and the number of commoners’ animals on the Forest, the number of accidents is lower than last year.

Records reveal that the Agisters attended 10 accidents in September this year, compared to 13 in 2015, with six occurring during the dark and none involving local motorists.

Local organisations form the Animal Accident Reduction Group, which meets twice a year to consider what more can be done to increase drivers’ awareness of the animals roaming the Forest using, as far as possible, the latest evidence about where, when and why the accidents occur.

The Commoners Defence Association (CDA) is starting an autumn campaign to make commuters more aware when driving across the Forest, including the creation of awareness posters.

Jo Ivey from the CDA said: ‘We will be working with the New Forest Business Partnership and local employers to publicise two messages “40 is too fast in the dark” and “Always be animal aware”.

‘While many drivers think that driving up to the speed limit is safe at all times, recent evidence has shown that 40 mph can be too fast at night – especially if there are cars coming the other way with their headlights on.’

Drivers are asked to check that they have the current version which has updated phone numbers for the Police non-emergency (101) and the Forestry Commission’s 24 hour number (0300 067 4600).

Please also consider displaying a car window sticker saying ‘I slow down for ponies’. Both the cards and stickers are available from local business or information points, or download the card and find out more about animal accidents at www.newforestnpa.gov.uk/animalaccidents

Driving tips:
• Be ready to stop – ponies may step out even when they’ve seen you approaching
• Drive slowly, especially at night and when other cars are approaching with their headlights on
• Give animals grazing by the side of the road a wide berth
• Take extra care when there are animals on the verges on both sides of the road – they may cross to join their friends
• Remember that deer easily jump the fences alongside roads like the A337, A31 and A35 and when there is one deer more will usually follow
• The faster you are going, the greater the damage will be to the animal, your car and your passengers – start your journey early so you don’t have to hurry.

If you witness an accident:
If you witness or are involved in an accident involving a pony, donkey, cow, pig or sheep, call the Police (999 for an emergency or 101 if it’s not an emergency). Animal emergency hotline cards also give you the numbers to call if you see sick, injured or distressed animals.