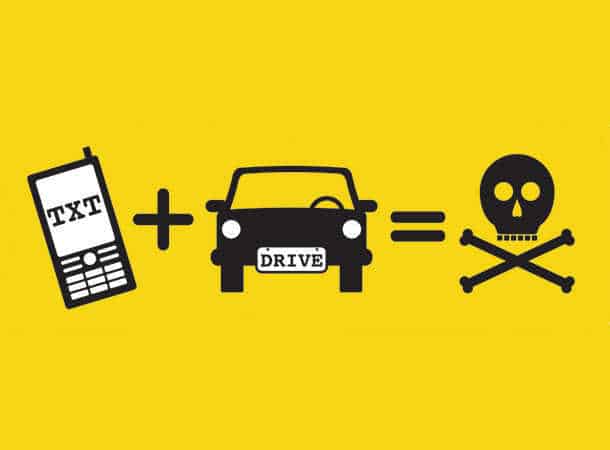 Hampshire County Council is supporting the national THINK! campaign highlighting the dangers of using mobile phones behind the wheel.

Hampshire County Council’s Executive Member for Environment and Transport, Councillor Rob Humby, explained: “People are four times more likely to be in a crash if they use their mobile phone while driving.

All drivers need to give their full attention to the roads at all times, or the consequences can be severe.

Safety must come first, for everyone on our roads, and calls and text messages can wait.”

It is illegal to use a handheld mobile when driving, which includes using a phone to follow a map, read a text or check social media.

This applies even when stopped at traffic lights or queuing in traffic. It is also illegal to use a handheld phone or similar device when supervising a learner driver.

In March, the penalty for using a handheld phone whilst driving was increased to six penalty points on a driving licence and a fine of £200.

The national THINK! campaign highlights the dangers of using mobile phones while driving, and advises motorists to put their phones in the glove compartments to avoid temptation.

It supports the RAC’s Be Phone Smart campaign encouraging drivers to make an online pledge to put their phone away while driving.

Handheld phones can be used if cars are safely parked or if drivers need to call 999 or 112 (the same as dialling 999 but 112 will work on a mobile phone anywhere in the world) in an emergency, and if it’s unsafe or impractical to stop.

Using hands free (e.g. for navigation) is not illegal.

However, if this is distracting and affects the ability to drive safely, drivers can still be prosecuted by the Police.