You are here: Home / News / Most Successful Events So Far 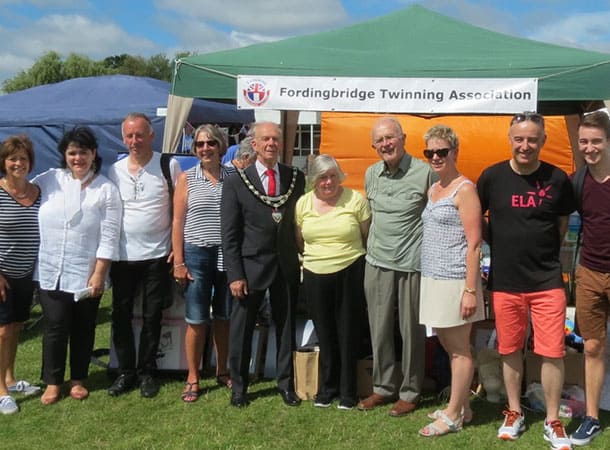 The weekend commenced with a lunch for our French visitors on Friday morning at the Fordingbridge Town Hall. It was sad and regretful, that the French Flag had to be lowered to half-mast at the beginning of the weekend, because of the tragic events that took place in Nice, the evening before.

On Saturday morning, the Mayor, Malcolm Connolly, treated the French guests to a lunch at Roman Quay, Fordingbridge, which commenced the way it was intended to go on, with only the Mayor to be seen with a cup of tea. Mary Adams and Georgina, both committee members of the Twinning Association, were forced to sit in the “Naughty Corner” of the Fig Tree Cafe. In the evening, the French guests were provided with an English-style dinner, with a selection of good English cheeses

During the day, the whole team spent the day-time at the Fordingbridge Show, the best ever so far, when two of the French guests won the Duck Race, not bad considering that there were nearly 2,200 ducks!

Future events for the Twinning Association next year (which will be the 35th Anniversary of the twinning), will be celebrated over the weekend of 26th to 28th May, with an updated signing of the Twinning Charter, a series of football matches, lunches with plenty of music, a barn dance, with many more activities and events.

This year the Fordingbridge Twinning Association has organised a Schools’ competition, which was exceptionally well attended, a Boules evening (at “Sandy Boules”), a visit to Sontra, a town in Germany which is also twinned with Vimoutiers, and the Summer Festival, which the French guests have just attended.

This year, the Association is also organising:

For further details of any of these events, and/or if you would like to join us, do contact Alison Ayling Chairman, or Derek Ayling, publicity, on 01425 650770 or by email, on