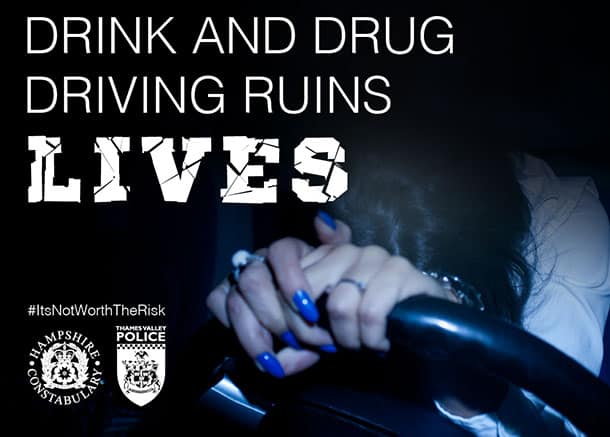 Irresponsible and dangerous drink and drug drivers are to be targeted in a month-long campaign against the destruction and distress caused by collisions involving those under the influence.

Officers from Hampshire Constabulary and Thames Valley Police’s Joint Operations Unit are encouraging drivers to know ‘It’s Not Worth the Risk’ and not to drink alcohol and/or take drugs then get behind the wheel.

Between 1 December and 1 January, officers will be carrying out breath tests, drug tests and field impairment test at every opportunity.

This is to raise awareness to people that we are proactively able to identify those that drive whilst impaired.

The public are encouraged to report drink and drug drivers with as much information and detail as possible so they can be targeted. If you know someone who drink or drug drives you can report them on 101 or via CrimeStoppers on 0800 555 111.

If the person is an immediate risk to the public and themselves, we suggest the people call 999.

On Average 20 per cent of all fatal collisions involve an impairment from drink or drugs. In Hampshire and Thames Valley region we catch around 400 drink drivers a month.

“Even the smallest amount of alcohol or drugs in your system can affect your ability to drive safely.

“Friends, colleagues and family members can positively influence those around them. So we are calling on them to stop potential drink or drug drivers from getting behind the wheel and risking tragedy this Christmas.

“We’ll be running targeted operations across the region to enforce the law on drink and drug driving. If you drive under the influence, you can face a fine of up to £5,000, disqualification from driving, and a lengthy prison sentence.

“If you know someone who drink or drug drives you can help by reporting them on 101, or call 999 if they are driving or immediately about to drive under the influence.

“I am urging people to plan ahead during the festive season to think about how you’re going to get home and don’t forget about the impact alcohol & drugs can still have the morning after.”

Our message is simple.
DON’T DRINK OR DRUG DRIVE – IT’S NOT WORTH THE RISK.