You are here: Home / News / Cycling in Germany 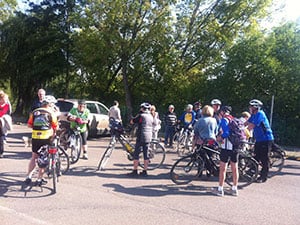 This year the essentially “social” event which was organised by the Twinning Association, was held near Potsdam in Germany in an area near to one of its National Parks. The cycle routes varied from 40 to 60 miles, on mainly designated cycle lanes and across flat terrain.

One of the routes took in a tour of Potsdam, where the group enjoyed a day long cruise from Potsdam to Berlin. The group stayed in a small holiday village, similar to Godshill’s “Sandy Balls Holiday Village”.

Next year the event will be held in France, during the second week of September. Do put the date in your diary if you’d like to join us. For further details, contact Derek or Alison Ayling on 01425 650770,
or email