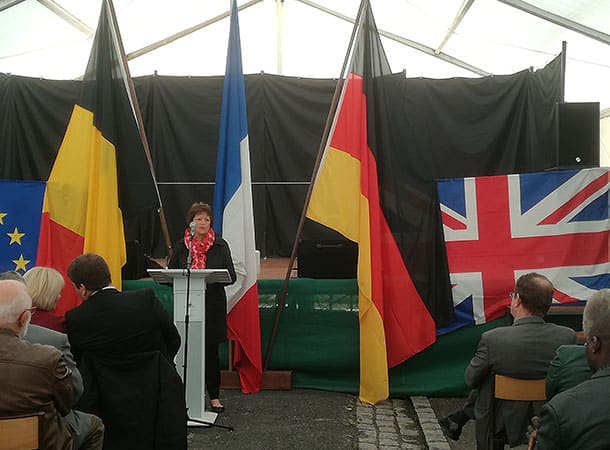 There were several delegate from England present, representing Fordingbridge, at the Festival, also joined by many delegates from Belgium and Germany

Alison had to explain (humorously) that this was the fourth year in a row, that the UK still doesn’t know where it is with respect to “Brexit”, a statement which seemed to cause great mirth, laughter and delight with the audience!

The delegates were all treated to various dinners, brunches, entertainment, food, drink and cheese sampling, over the weekend.

It had to be admitted that the French certainly looked after their guests very well indeed.

This year, the function was also blessed by the presence of Paul Hammond, President of Fordingbridge Rotary, with his wife, Gaynor,  this year.

Paul was introduced to Ron Wrigley a past-President of Camembert Rotary, based just outside Vimoutiers.

It is hoped, that in two years’ time, when it will be the 40th anniversary of twinning between Fordingbridge and Vimoutiers, that there will be a significant Fordingbridge Rotary Contingent present.

The Fordingbridge Twinning Association is now preparing for its annual “Musical Soiree” to take place on Saturday 2nd November, at Fordingbridge Town Hall, when all the surplus “Cidre”, Calvados and Camembert cheese, will be consumed: an event not to be missed.

Live music to be provided by the superb “Blue Tides”.