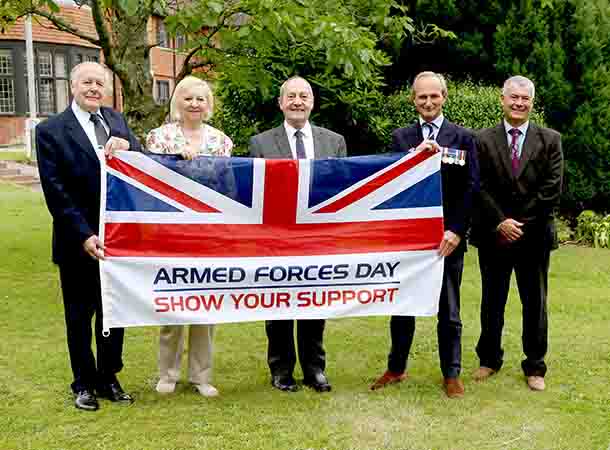 The flag will fly until the end of Armed Forces Day on Saturday 29 June.

Cllr Tipp said, “It’s important we show our support in this way, to recognise the contribution made by currently serving and past Armed Forces”

Cllr Gossage said. “Armed Forces Day is the annual recognition of the military covenant between the people of our nation and its Armed Forces acting in the defence of the nation.

The defence of the nation is Government’s first responsibility.

Individuals in the Armed Forces give unconditional public service to exercise that responsibility.

This can come with a heavy price for them and their families for years to come.

“Armed Forces Day is also about recognising the part played by the families of service personnel, many of whom live in our community.

They remain at home while their sons, daughters, husbands and wives of often serve for extended periods overseas, and in dangerous circumstances.

This week we, the people at home, pay tribute to our service personnel who stand ready to defend our freedom.”

Armed Forces Day aims to raise awareness of the contribution made to our country by those who serve and have served in Her Majesty’s Armed Forces.

To find out more about Armed Forces Day, visit www.armedforcesday.org.uk